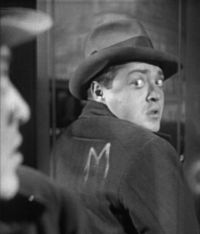 M  has been taking up a slot in my Netflix queue for over 2 months. Originally I had gotten it not just because it’s critically acclaimed, but it’s also one of Peter Lorre’s first roles (Peter Lorre rocks).

In the movie, Lorre plays Hans Beckert, a serial killer/rapist who preys on children. Not exactly what you’d call an upbeat film – which naturally then led it to sitting neglected on my counter for quite a while (as happens semi-regularly with the more serious fare in my Netflix queue).

Last week I finally got around to watching it (turns out Peter Lorre rocks in it), and there were a number of interesting comparisons to The Baron, a IF by Victor Gijsbers, which I played recently after a recommendation from a commenter here. In The Baron you play a father who is struggling against his pattern of sexually abusing his daughter. Both explore this same dark side of human nature in different ways.

To be honest, I went through a fair bit of internal debate to even discuss these two works. It started with having to restrain myself from my usual sacrasm in just coming up with a title. As I struggled more and more with how to discuss the portrayal of the sexual abuse of children, I questioned if it was worth the mental energy focusing on such a macabre subject. But in turn I realized the same argument could also be applied to the notion of making games with these subjects.

While I’ll naturally defend anyone’s right to communicate these types of themes in art, it was more a question of, “Why would I want to devote my own time to it?” whether on the small scale of a blog post or larger. Time is precious, and surely, with all the criticism heaped upon games by the ignorant, this is not the most effective theme to pursue. But in the end, all art serves to shed light on human nature, and it is necessary that at least some art chases after the dark and horrific corners of the human soul. In doing so, that we may better understand all the problems and the people in our society, to encourage change for the better. It becomes important then, to look at how works like these attempt to do just that.

M is masterful in the sheer number of perspective changes. First you watch from the perspective of the kids’ parents, missing their children. Then you watch from perspective of the townsfolk, near hysteria over the danger. Then the police, who are clamping down on the town in their desparate search. The town’s criminals, both struck with horror of the crime and frustrated that they are associated with the murderer, vow to find him themselves.

You watch Lorre evading the criminals chasing him. You follow the criminals in their pursuit. By the time you reach the end of the movie, and Lorre’s impassioned speech defending himself, you’ve bounced around so many times you’re ready to hear his point of view:

By contrast, in The Baron you’re constrained to one perspective, as the abuser. You start by not realizing your role, as you leave your cottage at night to make your way to the Baron’s castle, where he is keeping your daughter Maartje. Along the way you have several confrontations that lead to the revelation that you are in fact the same person as the Baron. You are the one who cannot control himself and is abusing his daughter.

Each confrontation makes you ask questions of yourself, either in the confrontation itself, afterwards in interpreting it to your daughter, or both. On your way to the castle you pass a she-wolf in the forest – did you ignore her as you do any difficulty, or did you call on your courage to continue the hard task in front of you? A gargoyle, who must kill an innocent every night to keep from returning to stone permanently, seeks your counsel – is he better off forgoing his life or is change possible? Then you confront the Baron himself. Your ultimate confrontation is with your daughter, who you must recount your journey to and come to a decision on how you view your own terrible acts.

The variety in ways you can approach each confrontation serves another purpose beyond the introspection of a single play through. Playing the game again is made to parallel another evening where you have to face the same compulsion. Every night is the same struggle. Do you seek forgiveness, or is your behavior uncontrollable, like Beckert’s? Do you believe you can achieve forgiveness through repentance and self-contempt, or are they your punishment that you must accept without hope? How can you keep yourself from falling prey to the same impulses? You can’t simply answer these questions once and have solved the problem.

The movie asks these questions implicitly, by having characters state their perspectives or showing them dramatically, leaving the question in the viewer’s mind. The game questions you directly, in the context of the almost-dream world you journey through. The questions they both raise are never really resolved – I don’t know that they ever could be. Art like this can force us to ask questions like these, but answers will never be forthcoming. It is the struggle to find these answers that is what enlightens us.