A few weekends ago I took part in the second annual EALA Game Jam. This year some folks from Pandemic were able to join us as well (so I supposed that should be the first annual EALA & Pandemic Game Jam). Nothing like bonding late at night staring at computer screens drinking pizza and beer while making games.

My game was a short abstract take on the financial crisis. To be fair, I spent a little more of my spare time on it afterwards, to add the tutorial and tune the difficulty, so it’s more like a couple weekends of effort than the straight up one weekend gamejam. Turns out tuning simulations for meaning is hard.

It’s built, like most of the other games were, using Angel, which is a (mostly) 2D prototyping engine that’s available open source on Google Code. It’s also spawned an XNA-based brother, AngelXNA. Or should the gender of a game engine be female? Anyway, check them both out for your prototyping needs.

I’d like to link to more of the other games here (since they’re way more fun than mine), but am not able to – hopefully EA will put up it’s own site for the jam soon.

Before you play it, definitely check out the in-game tutorial. And with all that, here’s my game: STCK 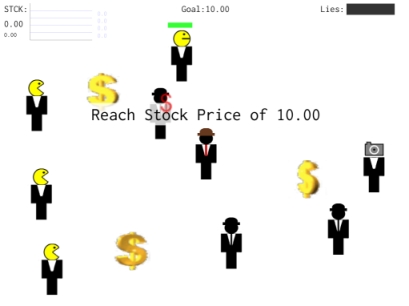 5 Responses to Jammin’ the suits – STCK