In research for my game set in Iran, I’ve been reading a number of books. Most recent is Cruel and Usual Punishment, by Nonie Darwish. It’s a breakdown of Sharia, Islamic religious law, and how she thinks its laws enforce a culture that strips women of their rights, create other human rights violations, and breed terrorism. 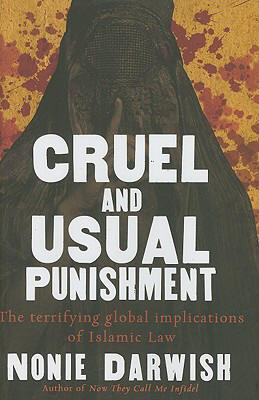 While aspects of her personal life, growing up in Egypt as Muslim and eventually converting to Christianity, are prominent in the book, it’s most interesting when she’s tying historical context to laws and their effects over time. That part is fascinating not just for the analysis of human nature but how it is affected by systems design. (On a side note, every systems designer should try to create a religion.)

I wholeheartedly believe that in practice, outside of any particular system, the majority of people will act in a morally positive manner. The exceptions are then psychopaths, the roughly one percent of of the population who have no internal moral boundaries, and those that live under systems that cause the dehumanization of other classes of people. From there almost any evil act is easily rationalized by otherwise compassionate people (see also The Lucifer Effect).

Islam was started in the 7th century by the Bedouin, a nomadic desert tribe. That life and its requirements for survival dictated a number of elements of Sharia. Living in tents without much shelter, in a tight knit tribe, the large open robes of the burka afforded women privacy (especially to, say, go to the bathroom). As natural protection from sun and sand, its use predates Islam.

To encourage an Arabian fighter to vie for the survival of his tribe, status, wealth, and his pick of women were afforded him. While Christianity holds the notion of marriage being a bond between a single man, wife, and God, here you have a structure meant to deal with harsher circumstances. The women of Arab culture at this point were more likely to have a better chance in life as one of many wives of a successful warrior, as opposed to being the wife of a man of lesser power and status.

As times changed, those in power sought to maintain their privilege. Sharia has rules to ensure that it spreads and that those in power remain so. It requires proselytization, allows brutal treatment of non-Muslims, mandates lying to non-Muslims in order to ensure the spread of Islam, and punishes apostasy (renouncing the religion) by death. It is these aspects of Sharia that Darwish argues are responsible for the determined spread of terrorism.

While Sharia is religious law, it is typically implemented in the secular law of most Islamic countries (at least those in the middle east). Article 4 of the Iranian constitution declares that all laws must be based on Islamic criteria. Articles 19, 20, and 21 would seem to grant equal rights protection to all groups, whether based on race or gender. Kinda contradictory, especially in light of existing women’s rights in Iran.

Women can’t be judges and their testimony is worth half a man’s testimony in court. A man can have up to four wives, while a woman can only have one husband. A wife can’t contest a divorce if her husband wants one, but her husband can if she does. Husbands automatically get custody of children after a certain age. Most directly worriesome though is the practice of honor killing – if a woman is found to have done something against the honor of her family (such as sleeping with a man that is not her arranged husband), there have been cases of male family members killing the woman, without punishment. While the latter may now be illegal according to secular law, there are many cases where killers still go unpunished.

Polygamy, while not the worst violation of rights compared to honor killing, has interesting systemic effects – if another wife is brought into the household, the existing wife’s children have to compete for resources and attention (especially since she is forbidden from having multiple husbands). It’s in her children’s best interest to be the sole wife. She can’t really do anything directly about it though, but if she spends as much of her husband’s money as possible, he may not be able to afford another wife. Even though your average middle class Iranian household may only have one wife/one husband, simply the possibility throws a seed of discord into the act of marriage. Neither party can rely on the institution to afford trust in the other.

And then there’s the burka/chador/hijab; women must be covered when going outside. Shirin Ebadi, Iranian feminist who won the Nobel Peace Prize in 2003 for her work advocating women’s and children’s rights, said, “If my husband can no longer marry up to four wives, take automatic custody of my children, do violence to me by right; if I have equal access to jobs, to professions, to study; if my legal standing in courts and my value in society is equal to that of a man, then at that point we can discuss the hejab.”

Certainly no one could disagree with the priorities expressed in that statement. But, how can you try to negotiate for those things while wearing a symbol of your submission on your head? Surely if the littlest of progress can’t be made, can you expect the rest? The Broken Windows Theory applied to gender equality, if you will.

As in any religion, obviously supporters range from those requiring strict interpretations to those who realize such works are the product of people in a historical context, and open interpretation to consider the value of human rights, science, and other modern issues. Darwish’s point is that the core of the system is corrupt, and even though significant numbers of Muslims may not believe all aspects of Sharia, it brings negative systemic effects to modern Muslim cultures (and will bring negative effects to Western cultures as more Muslim emigrate). Granted, Darwish’s conception of Christianity is somewhat misguided here, in that she holds it up as solely reinforcing love & compassion, while there certainly exists in the Bible arguments for a number of the same acts we would consider violations of human rights. And it certainly has its own fundamentalists that pick and choose what aspects to interpret literally.

Considering all this, and that games are best suited to exploring systemic effects, a game meant to look at the effects of a core piece of a culture’s value system like Sharia would be of unimaginable scale, perhaps not feasible. Looking at pieces of it in a game is perhaps a more tangible goal. Something about the topic though, finally after many years of upholding the dynamic, plastic nature of the medium and the evolving semantics behind the word game, makes me queesy. There’s something that rings hollow when using “game” and “human rights violation” in the same sentence. This doesn’t reflect on the form, as it stands today, which is certainly capable of dealing with that, but just the connotation of playing at something so vile. However play remains at the core of understanding, so it might as well be used to understand some of the most difficult problems before us.